STAD is looking back at a well visited event with over 120 participants. We are pleased with the high number of participants as well as the interactive discussions both during the plenary sessions as well as during the breaks and drinks after the event. The event started with a warm welcome from gedeputeerde Floor Vermeulen from Provincie Zuid-Holland who explained the need from a public authorities perspective to discuss the impacts of automated driving on their operations. Bart van Arem (TU Delft) continued with providing an overview of the STAD project and the progress that has been made so far. The first session was concluded with insight into the Ethics involved with Automated Driving systems by Filippo Santoni (TU Delft). In the following discussion the setting of fixed safety targets as well as the question who influences the setting of these values was part of the discussion. 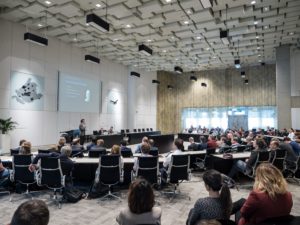 In the following session Rob Zuidwijk (EUR) explained the implications of truck platooning as well as the key research questions the STAD project has derived from these implications. The aspect of modal shift was brought up during the discussion as well as the positioning of STAD to look beyond the current horizon of executed and planned pilots. The session continued with Gerben Feddes (RDW) who explained the basic position of RDW regarding automated driving as well as the development of new Dutch exemption degree. The aspect of liability was discussed and Gerben explained he saw OEM’s now taking over insurance of automated vehicles to solve this. Tom Alkim (RWS) had the last presentation of the session explaining the current activities on a European level regarding changing law and regulation as well as the knowledge agenda that currently has been developed and is hosted by Connekt. 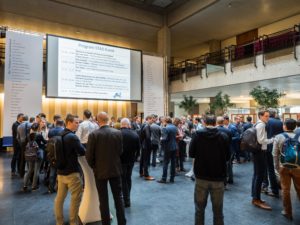 The third sessions kicked off with the City of Rotterdam explaining their case study in relation to the self driving city project. Bart Stoffels continued their presentation and explained the results of the self driving city project in more detail. The audience was invited to participate on the 11th of April to the Mobility matters event in Rotterdam. Marieke Kassenberg (Provincie Gelderland) explained in more detail the current and future developments for the WEpod project as well as the research questions from their perspective. Steven van der Kleij (RTHA) expressed the needs and requirements from the airports point of view regarding their connection to the metrostop Meijersplein and the complexity they currently experience. Maaike Snelder (TU Delft) finished the session with her presentation about network design and the focus the STAD project has chosen to investigate the impacts of automated driving on the infrastructure network. In the following discussion the necessary adapations (if necessary at all) for example for intersections were discussed.

The event closed off with a short introduction of the PhD students of the STAD project.

The presentations of the speakers can be found by clicking on the respective links below:

Gerben Feddes – RDW: Between rules and riding: the (im)possibilities in the admission of vehicles